IVF Cost: Analyzing the Average Cost of IVF in the USA

In Vitro Fertilization (IVF) is the gold standard of fertility treatments offering the highest rates of achieving a successful pregnancy each month. But, when it comes to asking what IVF costs, you’re likely to come across a number of answers that range wildly. This ultimate guide to IVF Cost is intended to break down those costs and just about everything else you’re wondering about the price of IVF. And hopefully, by the end of this, you can know how much IVF costs in the USA.

How Much Does IVF Cost?

IVF can cost anywhere from $3,900 to over $60,000. That’s an outrageously wild spread, but that’s the truth.  It all depends on who you’re asking and what specifically it is you’re asking.  That’s because the cost of IVF is dependent upon so many different factors and is billed for by multiple parties (fertility clinics, pharmacies, genetic labs, etc) and often takes multiple treatments to be successful.

Before we break everything down in detail, let’s quickly touch on the three of the most common prices discussed when discussing the average cost of IVF:

$12,000: The Average Cost Billed by the Fertility Clinic

As mentioned, the average cost of IVF is most often quoted at $12,000 because that’s what is stated by the Society of Reproductive Medicine and what is billed directly by a fertility clinic for a basic, no-frills, IVF cycle.  It’s important to note that it doesn’t include any critical “add on” services like ICSI (billed by the fertility clinic) or IVF medications (billed by pharmacies).

Although this average cost covers the minimum of what is required for an IVF cycle (natural IVF), saying IVF costs an average of $12,000 is a false narrative as greater than 99.99% of IVF patients add on services past this barebone IVF.

It’s also important to understand that this $12,000 is the average cost for a base IVF cycle. The prices you hear from individual clinics will range widely, from $4,700 here at CNY Fertility to around $20,000 according to publically available data.

It’s therefore important to understand everything that is included in that price and any extra costs a clinic might bill for. While you would assume those that quote you higher numbers include more things than those that quote lower numbers, it’s simply not true.

Here is a list of things you’ll want to check are included in the price of IVF your clinic gives you:

The Total Cost of One IVF Treatment

The total cost of the average IVF cycle in the USA is around $20,000. But how do we get from the base price of $12,000 to over $20,000?  To further explain, let’s take a look at some of the more significant additional costs (billed by both the fertility clinic and third parties) on our way to the commonly sited price of $23,000. Similarly, these are only averages, so it’s important to ask the clinic fees you expect to encounter with any additional services as these too range widely.

The average cost of IVF Medications is around $4,000. This is the cost of injectable medications used for ovarian stimulation (with the goal of developing a number of high-quality eggs) and transfer medications. It is one of the largest line items in an IVF cycle. Surprisingly, the cost of medications can cost as much or more than what some clinics charge for the entirety of their services.

While $4,000 is a good average there is a wide range of possible prices based on a few factors:

Unless one is pursuing a reduced/mini stimulation protocol, one can expect to pay at least $3,000.

The average cost of ICSI is around $1,500. However, this too is highly variable. Some clinics include it in their base pricing while others charge upwards of $3,000.

ICSI or intracytoplasmic sperm injection may not be absolutely necessary for everyone, but it will be for many. It is the most popular fertilization method and generally offers the safest assurance for fertilization.

The average cost of assisted hatching is around $500 but similarly varies in cost from free (included in base price) to around $1,000.

Assisted Hatching (AH) is an embryonic procedure in which a special laser is used to assist an embryo in hatching from its shell (zona pellucida). The zona pellucida initially helps to protect the egg and resulting embryo, but it is essential that the embryo hatch from the zona pellucida for it to implant on the uterine wall and create a pregnancy. AH is typically only used when necessary if the zona pellucida is not already thinning before an embryo transfer.

Some clinics may include cryopreservation and storge in their base price, but it typically garners a cost of around $600 with annual recurring storage fees.

Why needs cryopreservation? A large percentage of IVF patients. Patients who undergo IVF often have several mature eggs collected during the egg retrieval process.  Each mature egg is usually fertilized and grown in the embryology lab.  After several days of growth in the lab, a patient may have multiple high-quality embryos eligible for embryo transfer back to the uterus. In many cases, there are more embryos than can be transferred at one time, especially given the increased use of the single embryo transfer.

The surplus of high-quality embryos that are not initially transferred are in most cases, frozen or cryopreserved, for future use.

The average cost of a Frozen Embryo Transfer is around $4,000, but ranges from $450 here at CNY to over $5,000. Frozen embryo transfers (FET) are rarely included in the base price of IVF, but are a NECESSARY procedure for a large number of patients who, as mentioned above have multiple embryos or for those whose uterine lining is not prepared in time for a fresh transfer.

The stimulation medications given to produce multiple eggs often makes it difficult for the body to prepare the uterine lining into a cozy home for the embryos only a few short days after the egg retrieval. This can make the odds of a successful fresh transfer incredibly slim and it medically advised to do a “Freeze All” cycle followed by an FET.  Ultrasound and Bloodwork monitoring will help you and your reproductive endocrinologist make this decision during the stimulation phase of the IVF cycle.

Preimplantation Genetic Testing is the testing of an embryo’s genetic profile prior to being transferred. It is usually done to improve the success rates by determining which embryos have a normal number of chromosomes or which do not carry known genetic disorders of the parents.  It can also often used to choose the sex of the embryo transferred.

Genetic testing costs range significantly and often involve two bills, one from the fertility clinic for taking the embryo biopsy, the other from the genetics lab for performing the actual tests.  Besides the inherent differences changed by clinics for their biopsy, most genetic testing is charged based on the number of embryos being tested along with the type of tests being run.

It’s important to remember that it takes some time to get the results for PGT which means all the embryos must be frozen to await results. Therefore, someone doing PGT will also encounter fees associated with an FET.

The last number we are going to talk about here is the largest number when talking about the average cost of IVF. That number is somewhere around $60,000.

Simply put, IVF simply doesn’t always work. In fact, even in the best of circumstances, the odds of a single IVF  cycle working tops off around 50-60%. For those where the female is in their late thirties and forties, that number is much lower.  That means that many will undergo multiple rounds of IVF. How many? According to one study, the “average” couple will need 2.7 IVF (with a median of 2) cycles to achieve a successful outcome.

To help visualize why the average couple needs 2.7 cycles, we’ve built a graph that looks at the odds of successful cycles using data of average success rates for IVF extrapolated through 6 cycles using a statistical analysis of successful outcomes given multiple trials of independent events. Because there is some evidence to suggest that the results of two IVF cycles are not truly independent (with slightly higher odds of a subsequently failed cycle if given a previously failed cycle) we subtracted a 3% from every successive cycle to provide a more realistic look across multiple cycles. 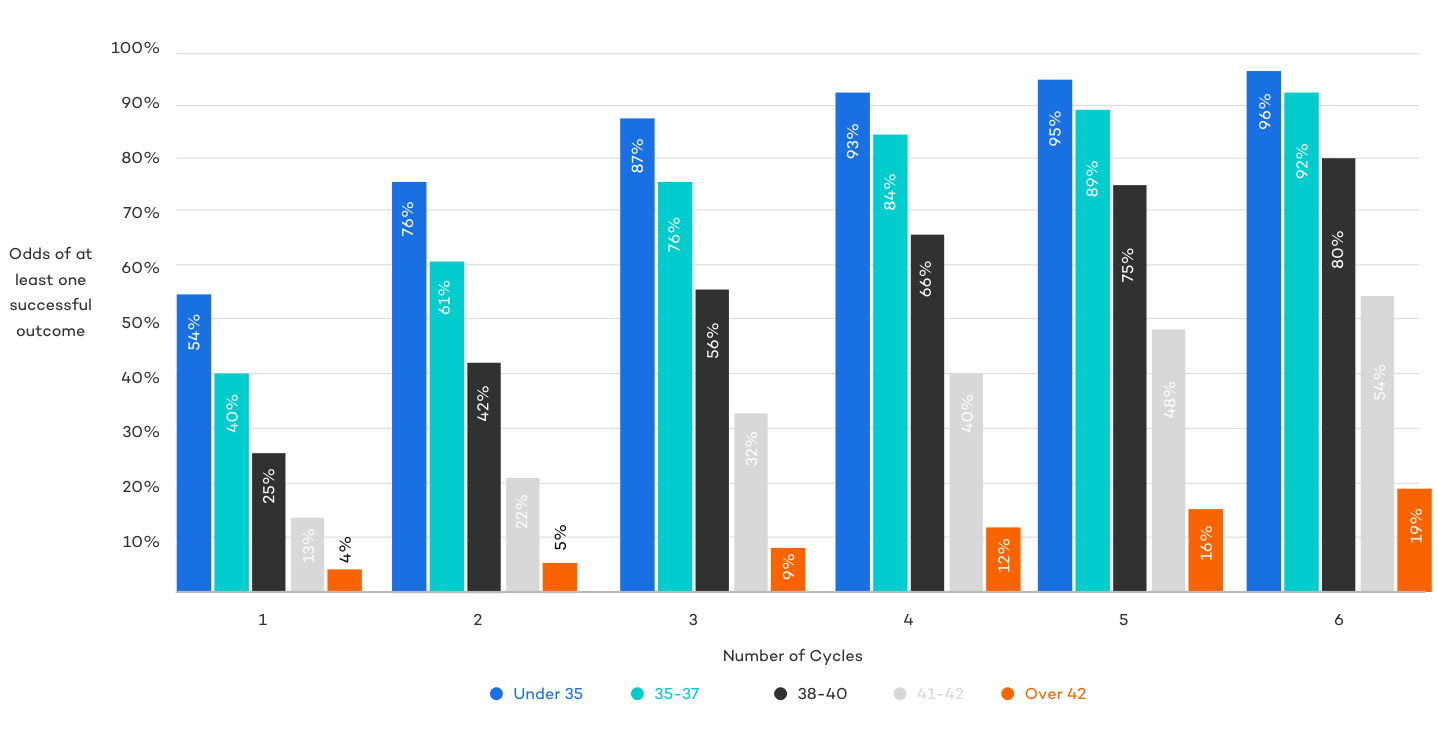 The above graph uses extrapolated data rather than real data due to the significant drop-out between cycles (along with other factors), which makes it exceedingly difficult to calculate the cumulative success throughout multiple real cycles.

As you can quickly see from the above graph, having a child from IVF can in many cases take multiple IVF cycles. Given the average cost of one complete IVF cycle is near $23,000, you should now be able to understand how the average couple spends around $60,000 on IVF treatment before they have a child.

Besides working for Starbucks or one of the growing number of companies offering IVF coverage as a way to attract and maintain quality employees a number of states have laws that mandate some form of fertility coverage. However, of the 17 states that have laws pertaining to infertility coverage only 8 of those states have laws that mandate IVF coverage in some form. Even still,  many of the laws mandating IVF coverage are written in a way that excludes a large number of people from coverage. For instance, some laws exclude plans offered by employers with less than 100 employees; according to the united states small business administration, this leaves out approximately half the workforce.

Let’s quickly review some of these state laws:

The Connecticut law includes both Individual and group health insurance policies and includes coverage for things like IUI, IVF, etc.

Delaware’s law includes up to 6 IVF Retrievals with an unlimited number of transfers from those retrievals and also donor egg cycles.

Each person is covered for 4 egg retrievals. However, if a live birth occurs in one of those cycles, two additional egg retrievals will be covered with a true lifetime maximum of six retrievals.

Each person is covered for 4 egg retrievals. However, if a live birth occurs in one of those cycles, two additional egg retrievals will be covered with a true lifetime maximum of six retrievals.

Coverage includes 4 Egg retrievals per lifetime and requires the patient to 45 years of age or younger. Employers with less than 50 employees are exempt.

Private health plans from employers with 100 or more full-time employees must provide coverage for up to three cycles of IVF.

As a fun experiment, we’d like to compare the prices of CNY Fertility, the nation’s most affordable fertility clinic, to those of the national average with our price and payment plan calculators.

With success rates similar to the national average and costs that are 1/3-1/2 the national average, most are able to save 10-15,000 per IVF cycle and even more over the course of multiple cycles. Because of this many people travel from around the country to be seen at CNY and need only a short 3-7 days around our offices for their egg retrieval and embryo transfer.