PGS testing (aka PGT-A) is not without risk. It’s a common selection tool for choosing the best embryo to transfer during In Vitro Fertilization (IVF). Using a laser, a small biopsy of the embryo is taken and the DNA inside the sample is analyzed. Does this biopsy harm the embryo? Does PGS testing work? Is it a guaranteed pregnancy?

What is PGS testing (PGT-A) and how is it performed?

In order to perform PGS testing, an embryo needs to be grown to the blastocyst stage which typically takes 5-7 days after the egg is retrieved and fertilized. 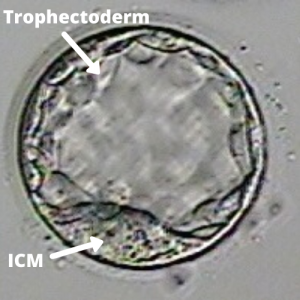 To do the embryo biopsy a laser is usually used. This laser can create small and concentrated  pulses of heat that can help separate the cells from the rest of the embryo. The sample is also tugged on to help pull it apart. Check out the following video to see this in action:

It all looks impressive but does removing a few cells in this manner actually harm the embryo?

Does PGS testing harm the embryo?

Maybe yes, maybe no. It’s really not all that clear. But let’s go back in time for a moment and take a look at cleavage stage embryos.

Long ago, in a not so faraway land, embryos were cultured to Day 3 and not to blastocyst. We just didn’t know how to do it. Just like cavemen hadn’t invented fire yet, IVF clinics hadn’t figured out how to create a good environment for embryos to get to blastocyst. 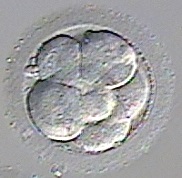 It’s easy to see how this could be detrimental to the embryo – what if the cell you remove happens to be critical for development? Without many cells at this stage, there isn’t much else to compensate and in this case PGS testing may risk harm to the embryo. With blastocysts, however, there’s plenty of cells.

Blastocyst culture has been the norm for some time now and embryo biopsy using a blastocyst is considered superior to cleavage stage biopsy.

As we saw above, embryo biopsy on a cleavage stage embryo may damage the embryo, probably because there aren’t many cells to begin with. With blastocysts, there’s plenty (hundreds) of cells in the trophectoderm so taking a little piece shouldn’t do much damage, right? It’s actually not clear!

A 2013 study found that there was no damage caused by embryo biopsy and biopsied embryos had the same implantation potential as non-biopsied embryos. But at least a few other studies have suggested otherwise.

During an embryo biopsy, about 5 cells are taken, but what if you take a bigger piece? A 2014 study looked at just this. They found that ongoing pregnancy rates were reduced when a large piece was biopsied from an embryo, presumably because the embryo wasn’t able recover.

How developed the embryo is at the time of biopsy might also have an impact. A 2019 study found that embryos had better outcomes if they were biopsied when expanded and hatching out of the zona. Embryos biopsied too early had drastically lower success rates, and the authors suggest this is because of damage caused by the biopsy itself. 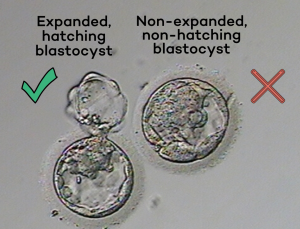 Another 2020 paper predicted that 17-39% of embryos may be lost to the embryo biopsy process itself. They got this figure after looking at the results of a large study where PGS testing didn’t perform as well as predicted.

So PGS testing may risk harm to the blastocyst and this can impact success rates.  Taking the right sized piece, and biopsying at the right time might reduce the damage, but there may be other factors at play that we don’t know about.

If we’re talking about the risks of PGS testing, we need to weigh this to its benefit of it. PGS testing is built on the core idea that transferring chromosomally normal, or euploid, embryos increases success rates and decreases miscarriages. So in practice, is this what we see?

It’s actually pretty controversial! Some studies find a benefit, and some don’t.

A 2015 study reviewed several studies that compared PGS testing with no testing and found a benefit overall, however these studies were small and used good prognosis women (<35, lots of eggs retrieved and biopsied) who may have had a better shot anyway.

A large 2019 study found no difference when using PGS testing across ages 25-40. However further analysis showed that the 35-40 group had improved rates with PGS (from 37.2% to 50.8% ongoing pregnancy rate).

So what about miscarriage rates?

So generally, PGS testing might make sense for women older than 35. The idea here is that egg quality diminishes with age and causes more embryos to be chromosomally abnormal, or aneuploid. There is a catch in all this though – you need to make euploid embryos for this to work! And even then there’s no guarantee.

PGS Testing is Not a Guarantee

PGS testing may work for some, particularly those above 35, but there’s a few hurdles that need to be overcome first. One of the biggest risks in doing PGS testing is the very real chance that there won’t be any euploids to transfer – and even with one, there’s no guarantee it will become a baby.

Not everyone makes blastocysts

This seems obvious but is often overlooked, particularly for first time IVF’ers. Blastocysts are an advanced stage of embryo development and not all embryos make it to this stage. In fact, as many as 50-70% of embryos arrest , or stop developing, before they make it to this stage. So for someone with 10 embryos, they might expect about 3-5 blastocysts. But this isn’t true for everyone and for some women, their embryos simply won’t progress to this stage. It may even get worse with age .

Even with blastocysts, there’s a chance that they’ll be chromosomally abnormal (aneuploid) and you won’t be able to use them. The chances of getting a euploid drops from about 60% per embryo (for women <35) to about 10% at 45. And for some women, these numbers don’t apply – some may get more, less, or even none! It’s impossible to predict exactly what will happen for a specific situation.

Transferring a euploid doesn’t mean it will work

A common misconception is that transferring a euploid is a guaranteed pregnancy. This isn’t the case. A 2018 study found that euploids have about a 60-70% chance of success, regardless of age. And embryo grades still seem to matter too!

The embryo isn’t everything – we can’t ignore the role of the endometrium (uterine lining) here. If this isn’t optimal to accept the embryo for implantation, then the embryo may not lead to a pregnancy.

The technology that goes into PGS testing is constantly changing. These days something called “next generation sequencing” or NGS is used for DNA analysis. It is much more reliable than the older technology because it has a higher resolution. This has led to the discovery of “mosaic” embryos, or embryos that have a mix of aneuploid and euploid cells:

With older technology, these may have been labeled as abnormal and discarded. With the new more sensitive technology we can pick up on tiny differences and label them as mosaic. Mosaic embryos have intermediate success compared to euploids and we’re still learning a lot about them.

There’s some evidence that mosaic embryos can self-correct, where the abnormal cells are outgrown by the euploid cells, resulting in a euploid embryo over time. There’s even some people out there that believe that all embryos pass through a mosaic stage and that this is a normal part of their development! There’s still a lot to learn about this and makes you wonder what the future will bring. 10 years ago we were discarding embryos that by today’s technology we would transfer (as mosaics). So what will happen in the next 10 years?

Is the small biopsy representative of the whole embryo?

Another issue is the fact that the diagnosis of your embryo is based off a tiny part of the embryo itself.  This might only be 5 or so cells compared to the much larger 300 cell embryo. Is this really enough to diagnose the entire embryo? Remember, some people will discard their embryos if they’re abnormal – but what if the biopsy sample was abnormal, while the ICM (the inner cell mass and part that becomes a baby) was euploid?

It’s hard to know for certain if this happens or not, since we don’t biopsy the ICM, but we can clearly see from this image that the results of the biopsy depend on what part of the embryo the biopsy is taken from. And there is evidence that re-biopsying embryos can have different results from the original biopsy .

The future might be in non-invasive PGS testing, where the fluid inside the blastocyst is analyzed rather than lasering a piece of embryo off. This might improve the success rates by limiting the damage done to the embryo. Or maybe we’ll just have more questions. 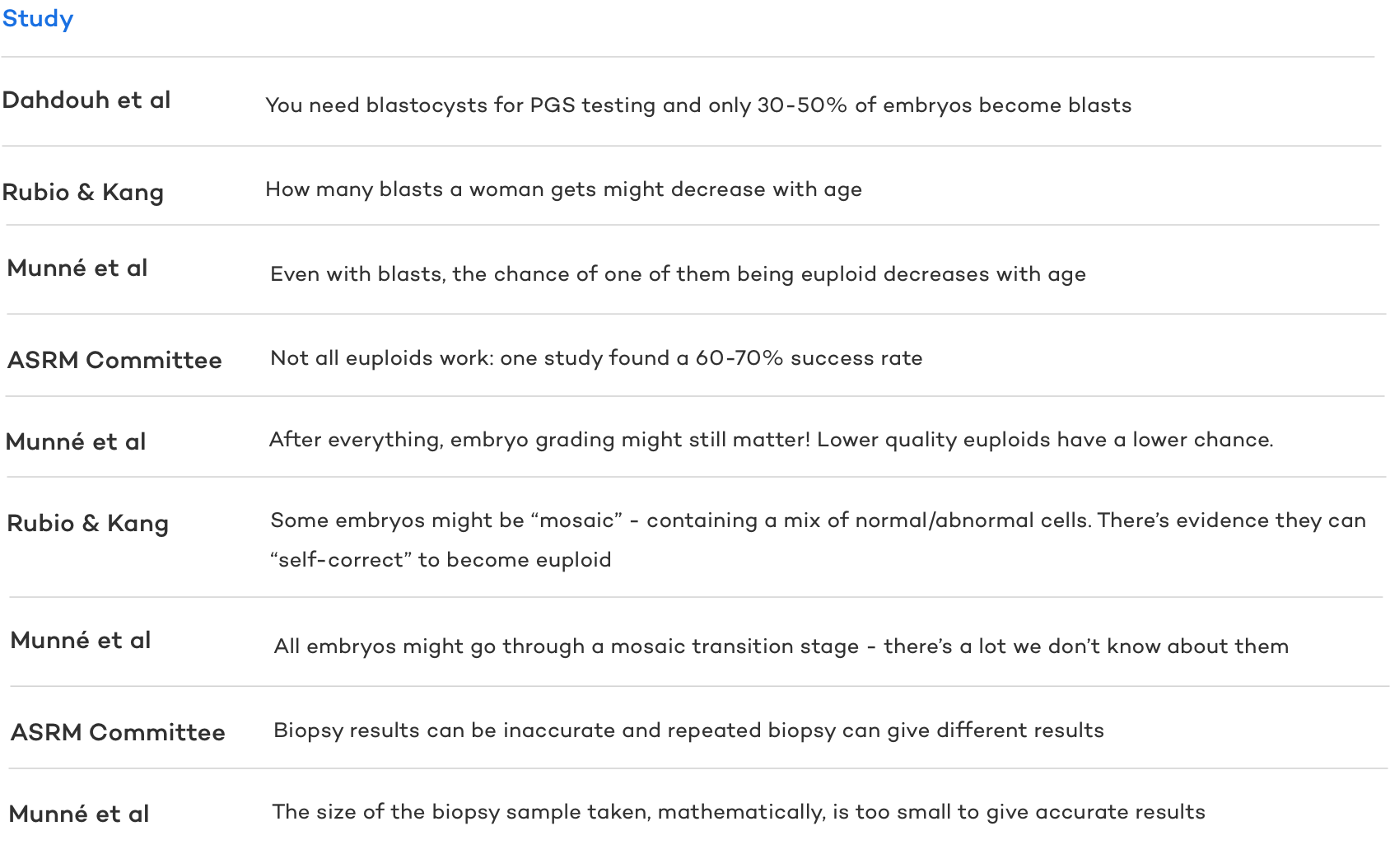 PGS testing is not without risk. In terms of damage to the actual embryo, yes this is a possibility and some data shows that embryos can be lost during the process. In terms of the bigger picture, where we ask “does it even work?”, the answer is controversial but seems to show benefit for woman older than 35. Here, choosing a euploid embryo will give a better shot at a pregnancy, but remember, not all women will get blastocysts that are needed for PGS testing, and not all blastocysts will be euploid! Even after transferring a euploid, there is no guarantee of a pregnancy. The technology is not perfect and  “euploid” embryos might not even be euploid after all. And that’s without even mentioning the cost. Given genetic testing can cost thousands of dollars due to the biopsy fees, genetic testing/lab fees, as well as the fact that it requires a Frozen Embryo Transfer (FET) it can easily make up a large portion of the total cost of IVF.

Given all of this, it’s easy to see how the answer of to the question, “should I do PGS,” can fall on either side of the equation. Due to the immense complexity of PGT-A/PGS testing, we always recommend that any decision made about genetic testing, whether being done in the hopes of reducing miscarriage, selecting the sex of the child, or another reason, should be done in consultation with a fertility specialist. 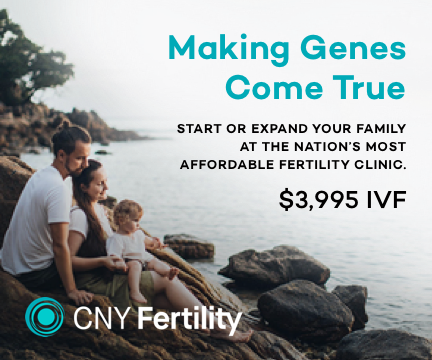 Other Posts on IVF and Genetic Testing