How Much does an IUI (Artificial Insemination) Really Cost?

There are many factors that go into deciding if Intrauterine Insemination (IUI – aka artificial insemination) is right for you. One of the things you’ll likely be considering as you explore your fertility treatment options is cost. It’s important that you understand both the cost for a single artificial insemination, but also the cost for you to bring home a baby using IUI.  That means when you ask, “how much does IUI cost” it’s not only important to consider the cost of a single artificial insemination cycle, but also the success rates of an IUI of someone with a similar infertility diagnosis.  Infertility is usually diagnosed after having both male and female fertility testing and the consultation of a reproductive endocrinologist.

If you’re considering whether or not IUI is a good fit for you and curious about the cost of an artificial insemination (or the multiple IUIs it may take you to have a baby), keep reading. We’ve compiled this resource to help you navigate the key factors that influence the cost of IUI procedures and what to be aware of before embarking on your IUI journey.

How Much Does an IUI (Artificial Insemination) Cost Per Treatment Cycle?

An artificial insemination can cost anywhere from a few hundred to over $4,000 for a single cycle. That incredibly large range is affected by three important components that may or may not be used in your cycle. 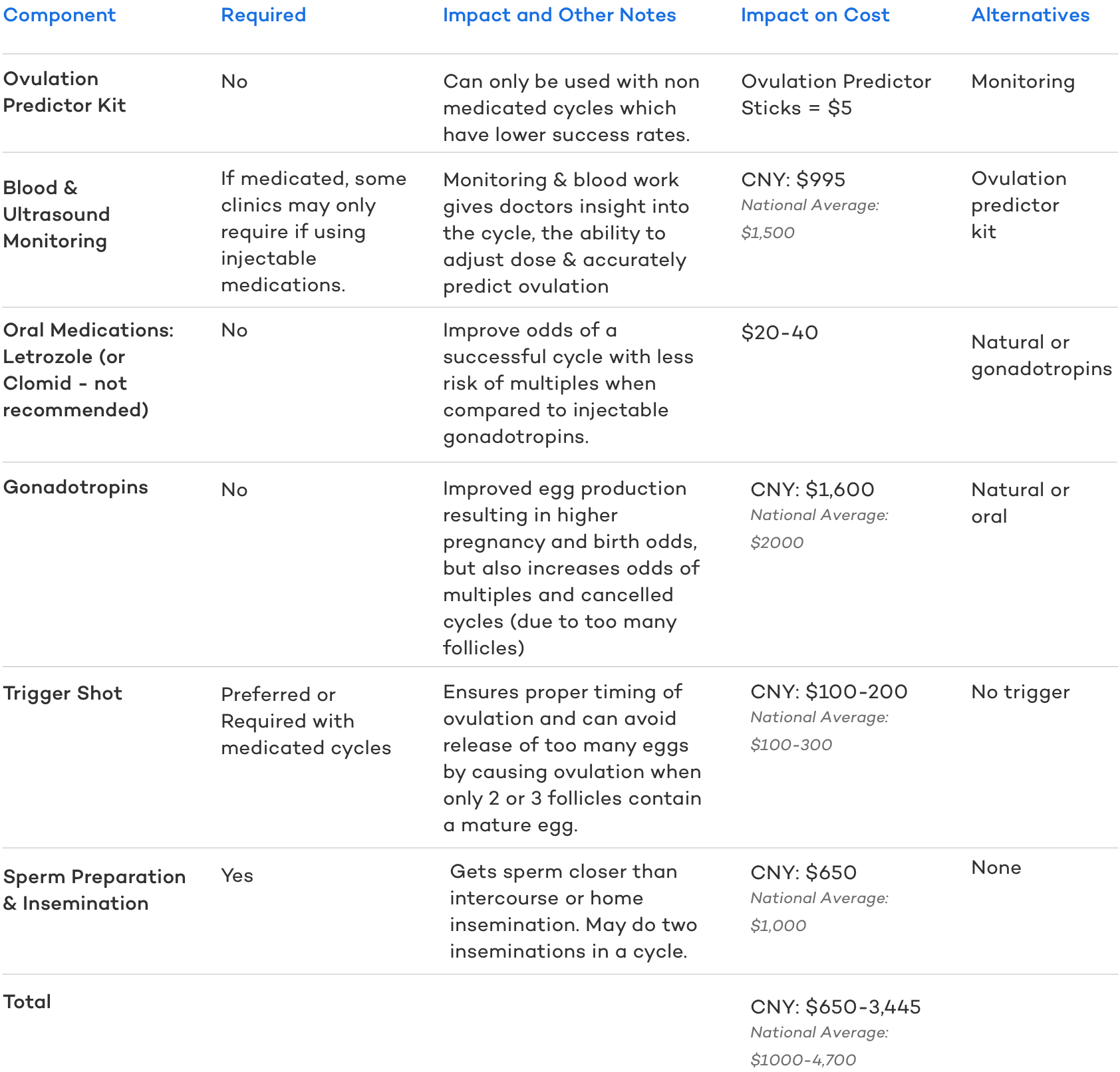 As you can see, the costs can range significantly depending on what you and your provider decide is best for your unique situation. While a natural cycle is rather affordable at only $650 and can be a great option for single or lesbian women It isn’t often recommended for heterosexual couples, particularly if the M/F couple has been having regular unprotected intercourse for over a year and the male has good sperm.  Still, for many women like those with ovulation disorders like PCOS, the addition of inexpensive letrozole can yield great results while still being quite affordable. On the other hand, IUIs with injectables (most often prescribed to older women or those with low ovarian reserve as it can result in extremely high odds of multiples otherwise) can become quite costly due to the expensive medications.

Self pay pricing. The above calculation is for simulation purposes only.

While the cost of this affordable solution can look enticing based on the per treatment cost, it’s important to dive a little deeper into the costs of what truly matters: the cost per live birth.

What Is the Cost of Artificial Insemination per Live Birth?

While IUI is often chosen because it represents a less invasive procedure, it is also sometimes chosen over IVF because the cost of the average IVF cycle is around $20,000. Upon initial examination, with prices ranging from around $650 to $4,700, artificial insemination costs significantly less and appears to be a good alternative to IVF. That said, IUIs have lower success rates across the board compared to IVF. 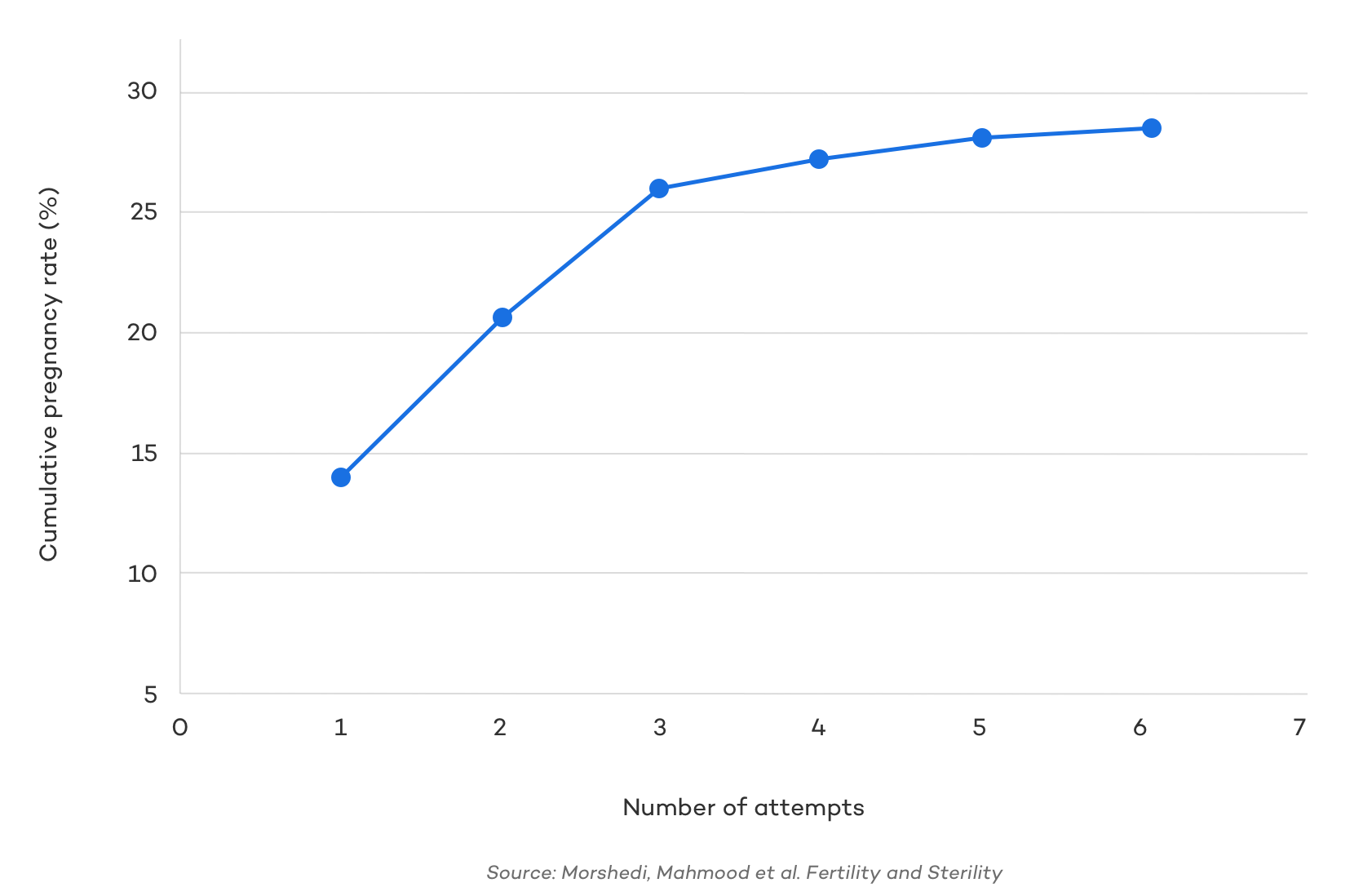 As you can see, the cumulative success of IUIs begins to flatten quite rapidly after the third attempted IUI. That means that after the third or fourth IUI, the cost per live birth for IUI treatment begins to skyrocket and the cost per live birth begins to favor IVF.  As you can see, considering only the cost of a single IUI doesn’t show you the whole picture of the total costs often associated with a successful IUI procedure.

Given most fertility clinics only suggest three IUIs before moving on, it’s far more likely that someone will only spend between $650-14,100 before either being successful with an IUI cycle or choosing to move on to IVF.  After three cycles, it will become increasingly important to speak to your doctor prior to continuing down your current treatment trajectory.

Remember, the odds of IUI success vary incredibly based on a number of things including age, total motile sperm count, diagnosis, medications used, time trying to conceive prior to seeking treatment and other factors. Making the decision is best understood with the consult of a fertility doctor.

How Much Does IUI Cost With Insurance?

One notable factor that can push people past a recommended cycle limit with IUIs is the fact that IUI is covered by insurance at a much higher rate than IVF and therefore, treatment cost doesn’t factor into the equation as much as it does with IVF.

Still, at the present time, only 18 states have mandated fertility insurance coverage. The degree to which IUIs, medication, and monitoring are covered varies by plan. Additionally, insurance companies sometimes place limitations on the number of procedures that are covered or what specific medications they will cover. Some people will have no out of pocket costs (or those outside of their deductible), while others will be responsible for their entire bill out of pocket. For these reasons, it’s best that you or your doctor’s office contact your insurance plan and see what is specifically covered by your plan.

It’s also important to acknowledge that there are many grants, guarantees (typically for IVF or donor eggs only), military discounts, and financing programs available to help afford your fertility care.

Take-Home Points About The Cost of Artificial Insemination

Most Recent Posts On Affording Treatment