IVF and Drugs from Goats and Rabbits 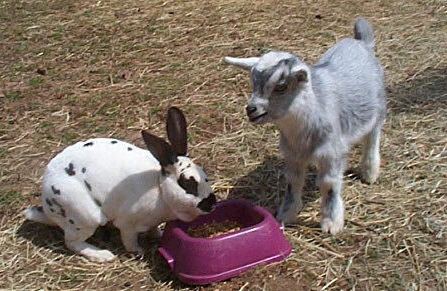 Presented by CNY Fertility Centers in Syracuse, Albany and Rochester New York.  Our services range from infertility diagnosis for couples trying to conceive, to advanced techniques for conventional and low cost IVF. This news article is not directly related to treatment of women trying to conceive , but is of general  interest and touches on the technologies we use in infertility treatment.

Humans have used plants and animals as natural sources of drugs since prehistoric times. The basic ingredient in aspirin dates to the discovery of the healing properties of the bark of the willow tree. Pigs were the main source of insulin for diabetes for a generation.  Mankind has always bred both plants and animals to improve their commercial value. More recently biotechnology has allowed modifications of plants so that they grow faster or fight disease. The latter properties are not possible from breeding alone.  Genetic material can be injected into seeds so that the plants will grow up and resist the fungus. There are also plants that are genetically modified to produce products such as antibodies and enzymes used in chemistry.

Changing the genetic properties of warm blooded higher animals to benefit mankind presented new challenges to scientists. After many others failed, Dr Ralph Brinster at the University of Pennsylvania and his diligent staff found the method which finally worked. Someday he might be a Nobel Prize candidate because his work in the early 80”s has now enabled others to produce the first approved drug to be approved for human usage. Now let’s look at why this work was done and then explain how IVF was used as the basis for this leap into the future.

Most drugs used everyday are relatively small molecules and can be synthesized. A familiar example is synthetic thyroid hormone for low thyroid conditions. Synthesis is the method used for pharmaceuticals for most of the last century. Most of these are administered in pill form.

Some hormones that we need to administer in human treatment are large and complex in structure. Examples are insulin and gonadotropin like the pituitary hormone follicle stimulating hormone or FSH.  The FSH which is now made by recombinant technology is the relevant example for women who are trying to conceive. Used in stimulation of the ovaries in infertility therapy like IUI, IVF, and egg freezing It is a protein with a complex structure and it can’t be synthesized. For years the only source was from the urine of menopausal women. At first it was allegedly from nuns in Italy, but the demand required much more than the convents could supply. Now the modern method of FSH for infertility treatment comes from cells derived from Chinese hamsters. The cells are injected with the DNA for FSH. This tricks them into producing human FSH. Millions of cells are cultured in huge vats. This now enables production of more FSH for infertility patients than could be practically derived from urine. Further, the FSH is much more pure.

FSH, a large complex protein
This now routine method of biotechnology, involves inserting DNA into cells like bacteria or hamster cells by the billions and producing drugs in huge sterile vats. Then the desired product has to be extracted and purified. In order to do this on large scale, a cell culture biotech plant can cost hundreds  of millions of dollars

There are some cases of drugs which might be best made by a new technique of genetic modification. This method is called transgenic when applied to living animals.  It has been done to improve the growth characteristics of baby fish.  DNA for growth hormone injected into the eggs of fish enables the fry to grow much faster. This is good for growing fish on a farm. It is not free because the baby fish eat more that their genetically un-enhanced peers, and we don’t want them getting out into the ocean, and reproducing and eating all the other innocent fish, so they have to be sterile.

Transgenic fish with high growth hormone compared to normal
There are certain disease conditions which require a protein drug but which don’t require large production. Thus there is not a big market to support the cost of a big production facility. So why not use transgenic animals to make proteins which can be made for less than half the cost. The investment cost is down to tens of millions. It still is not cheap to get the desired molecule out of the milk and purify and sterilize and package it and then invest in a very expensive series of clinical trials to prove it works.
Once the hormone is produced it must be purified and the extraction steps are similar.

These attempts to bring Brinster’s advances to the production of drugs have been funded largely by venture capital for years. It has been a long and dusty road. The group in Scotland which tried transgenics also funded the work on the first cloned sheep, Dolly. They are not in business any longer, nor are many other transgenic start-ups.

Another small company, GTC Biotherapeutics identified a drug which needed a biotechnology solution, Antithrombin which is used for an uncommon clotting disorder until now has been obtained only by extraction t from blood plasma. By the use of transgenics, now one  goat can produce as much antithrombin as can be extracted from 90,000 pints of blood. Now this new method provides a safe reasonably economical and stable source of antithrombin for this rare disease.

Other examples of transgenic “pharming” which are in the pipeline include a drug used for a rare hereditary form of edema.  Since you don’t need much of this to supply the world it will be produced in the milk of rabbits in Sweden. PharmAthene is using transgenic goats to produce stockpiles of a nerve gas antidote.

The techniques
The first step is to take advantage of the access to the beginnings of reproduction the embryo in the lab by doing IVF. This miracle of modern science is done easily now.  The scientists took genes for antithrombin and linked them to milk production genes . The genes were then injected using a microscopic needle into the one cell embryo.

Then the embryo was implanted into a surrogate goat. The kid was born, matured, was bred and then after she gave birth, she produced milk which contained antithrombin along with casein and other milk proteins. Thus some of the protein production of the milk has converted to produce a molecule which is useful for medicine. This success came after a number of failures.  Finally one of the goats produced a high level of the desired protein. In the future, the offspring  which have proven to be producing the best will be mated and their offspring will carry the trait and produce the product also. In this manner, a herd of modified goats can be raised.  All of this can be done for $50 million, far cheaper than the hundreds of millions needed for a biotechnology production facility.

In the future transgenic pharming may be the method of choice for a host of products for uncommon and rare diseases.