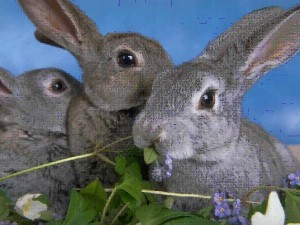 This article discusses the basic biology behind the process of In Vitro Fertilization (IVF) and may be helpful to couples who plan to undergo IVF. Technical terms may be found in a glossary at www.fertilitylifelines.com.
CNY Fertility Center has locations in Syracuse, Albany and Rochester, NY. CNY Fertility Center offers couples and individuals affordable fertility treatments including low cost IVF (In Vitro Fertilization) by our experienced and caring staff. 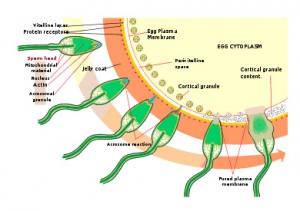 Sperm penetration and fusion, cortical granule reaction, from www.Wikipedia.com
Once one sperm has penetrated, the cortical granule reaction causes a shield to slam shut just inside the egg membrane within microseconds. This prevents the entry of another sperm. If this system fails and two sperm enter, there are two sets of male chromosomes.  This is called polyspermy and actually is observed commonly in the IVF lab. Three pronuclei, a sign that an entire extra set of chromosomes is present is a fatal flaw.

In IVF, in cases of low sperm numbers when the sperm function is inadequate for this task, delicate micromanipulation tools are brought to bear. Using methods developed by cell biologists, the embryologist sits before controls like joysticks on a video game. Imagine threading a bit of angel hair into a speck of dust and you will be able to understand how intracytoplasmic sperm injection (ICSI) is done. Now a daily part of the armamentarium of highly skilled IVF embryologists, it is nonetheless an amazing advance.

After fertilization, in the incubator, the pronuclei can be seen on day one. On the first day after insemination, the IVF embryologist looks for the two pronuclei as an indicator that fertilization has occurred. Further scrutiny of these under high magnification gives clues as to the future.  Lynnette Scott PhD in Boston among others has developed a system of predicting outcomes based on the tiny nucleoli in the pronuclei. If they line up in an orderly manner the embryos may progress. If they are disorganized there is a good chance development will be impaired. 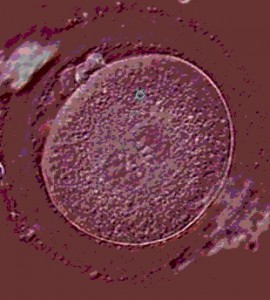 Pronuclei.
On day three the embryos are 5-8 cells 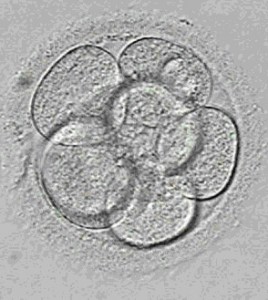 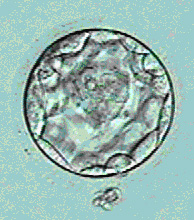 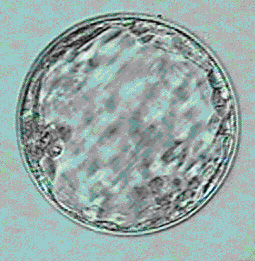 Laser ICSI used to breach the zona, as used for assisted hatching, from www.hamiltonthorne.com 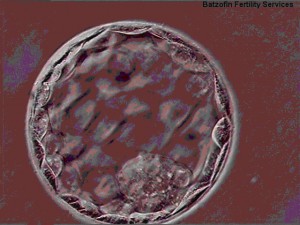 Blastocyst
Counting the chromosomes in the pregnancy tissue is recommended if a miscarriage occurs after IVF. This test can be performed in a genetics laboratory on miscarriage tissue in order to determine if one of these errors caused the loss. When aneuploidy is found in the tissue by chromosome testing, we are reassured that the loss was not due to a disease in the mother.
In IVF a common occurrence is the early pregnancy which attaches and produces a positive test, but then dies within a few days. Because we only know there is a pregnancy by looking at a biochemical reaction, the pregnancy test, this event is called a biochemical pregnancy. Most of these unfortunate occurrences are due to aneuploidy also. Implantation occurs, HCG hormone is produced but often the progesterone level is low, the HCG hormone does not rise and over the first week of the pregnancy it is apparent that the pregnancy is in danger, and then the hormone levels go down over the following week. In essence this may be considered a microscopic miscarriage. A tiny defective implanted embryo is lost which contained placental cells and usually had no fetal development at all.